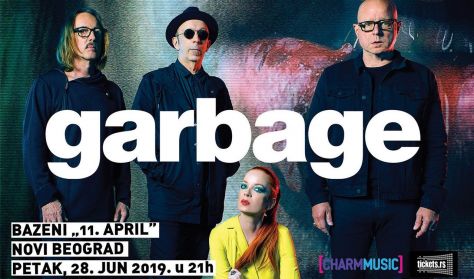 “The noise that keeps you awake” – legendary band GARBAGE is finally coming to Belgrade! Long-awaited concert of this American rock band will take place at the Sports and Recreational Center “11th April” on June 28th!

Garbage are one of the most popular bends from the 90’s and the beginning of 00’ in the world and as well asin Serbia. We had the chance to listen to their concert at the EXIT festival in 2005, but since then, fans in Serbia could only plan the trip to some of the countries in the region if they wanted to watch the show of their favorite bands. Finally, this year, Belgrade is happily on the Garbage tour date list!

Garbage consists of Shirley Manson, Duke Erikson, Steve Marker and Butch Vig. They have been together as a band for 25 years. Garbage has sold over 17 million albums worldwide to date  and have performed in more than thirty-five countries.

After forming in Madison, Wisconsin, Garbage released their self-titled debut in 1995, going on to sell more than 4 million copies. The band's unique sound and provocative visual aesthetic inspired massive worldwide attention and success. Their follow up album Version 2.0 was released in 1998 which also went on to sell over 4 million copies, topping charts all over the world and garnering multiple Grammy Award nominations, including Album Of The Year.

The band spent the next two years touring the world. They topped off their album campaign with the recording of the theme song for the James Bond movie “The World Is Not Enough."

In 2001 Garbage released the platinum-selling beautifulgarbage, later followed by Bleed Like Me in 2005, the latter of which earned the band its highest chart position of No. 4 on the Billboard Top 200 Album Chart.

After a 7-year hiatus, the band released their fifth studio album Not Your Kind of People in 2012 on their own independently-run record label, STUNVOLUME. The album was named one of Rolling Stone magazine's Top 50 Albums of 2012 and was hailed as the "alternative to everything," by Pitchfork.

In 2015, the band celebrated the 20th anniversary of their debut album Garbage with their sold-out "20 Years Queer” tour . Their most recent studio album, Strange Little Birds, released in 2016, debuted at No. 1 on Billboard's Top Rock and Alternative Albums chart and at No. 14 on the Billboard 200.

In 2017 they released their universally well-received book, This Is The Noise That Keeps Me Awake, shortly before embarking upon a Co-headline tour across North America with legendary post-punk band Blondie. They hit the road again in 2018, touring throughout Europe, North America and Mexico to celebrate the 20th anniversary of their beloved second record, Version 2.0. They will be spending most of the first half of 2019 in the studio, working on their as-yet untitled 7th record.

We have been waiting for many years, but Garbage is finally coming to Belgrade! Noise will keep you awake, if you come to the concert of this legendary bend – come to Sports and Recreational Center “11th April” on June 28th!

Tickets are available at starting March 11th online on  www.tickets.rs  and all points of sail of Ticketvision.

Early Bird" ticket price - 2,500 RSD is valid until March 31st or until the end of the stocks. After that, the regular ticket price for the concert will be 2,900 RSD.

André Rieu, the Dutch “King of Waltz”, who has made classical music accessible…